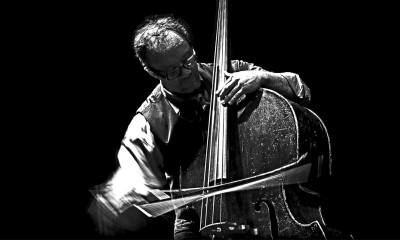 A Sound It Out favorite since its inception, the ever-hip, convivial bassist Sean Conly has brought his woody tone and exciting arco/pizzicato blend to bear in the series via various settings, including in bands led by saxophonist Michaël Attias, pianist Jesse Stacken, vocalist Fay Victor and pianist Mara Rosenbloom. That’s not to mention an absorbing night of duos with Attias in the first season, as well as his participation in the “Motian in Motion” Sound It Out fifth-anniversary festival show last summer. As a leader in the series, Sean has fronted a powerhouse quintet verson of his Re:Action band, featuring Attias, Ben Gerstein, Kris Davis and Gerald Cleaver. Another version of Re:Action – with Attias, Tony Malaby and Pheeroan Aklaff – released an outstanding album for Clean Feed in 2006.

Born in Colorado in 1970 to artistic parents, Conly grew up around band rehearsals and shows, experiencing in his young years “the last glow of hippiedom.” By age 6, he started playing guitar and eventually made up songs in the vein of his parents’ favorite LPs by the likes of The Beatles, The Doors and Harry Nilsson. For his school years, Sean moved to Topeka, Kansas, with his love of rock, punk and funk soon joined by a fascination with Miles Davis, Charles Mingus, Ornette Coleman, Jaco Pastorius. He learned from the example of veterans on the Kansas City jazz scene before moving east in 1992 to study at William Paterson University in New Jersey with Rufus Reid. After crossing the Hudson, Sean began working closely with the likes of saxophonist Greg Tardy (including a long series of recording sessions) and a string of elders. Among his peers, he performed and recorded as The Invisibles (alongside Malaby, Ben Monder, John O’Gallagher, Tony Moreno). Another excellent band, the collective Grass Roots – featuring the bassist with Darius Jones, Chad Taylor and Alex Harding – put out a gritty, soulful album via AUM Fidelity in 2012. And Sean’s duo with Attias released the great Think Shadow the same year.

Sean’s addictive new album as a leader – Hard Knocks (Clean Feed), featuring his trio with Attias and drummer Satoshi Takeishi – brims with piquantly noirish lyricism, richly implied harmony and free-spirited rhythmic interplay. The trio will celebrate the release of the album by performing for Sound It Out at Greenwich House on June 23, 2018. About his Hard Knocks band, Sean says: “This trio can be both drop-on-a-dime accurate and open as hell – in different ways in every song and every performance. That allows us to be totally in the moment with our sonic journeys. I love these guys. Michael is the most honest friend about my creative process – and he brings such passion to my melodies. He knows how to personalize a melody, so he makes my tunes sing in his own great, unique voice. Satoshi has been a hero of mine since we met in the ’90s. He’s one of the widest-ranging musicians I know, able to be literal and figurative in the same phrase.” — BB

Black Codes from the Underground by Wynton Marsalis (closely followed by The People’s Republic by the Revolutionary Ensemble).

I have many, but among more recent films, those for Birdman and No Country for Old Men.

I saw the Hank Roberts Sextet at Ibeam the other day – and it’s always amazing to see a group of great musicians really be a band. To me, that’s always the best music.

Favorite: Bimhaus, in Amsterdam – warm, intimate, earthy. I don’t have a least favorite. Or maybe I just don’t want to say…

“If you don’t live it, it won’t come out your horn.” — Charlie Parker

I don’t pay much attention to music media, actually. I tend to get my information about music from other musicians.

Maybe the person who doesn’t answer this…

Trump – for his egotism in the face of truth.

Lisbon – for the weather, the food, the company.

I would love to see the pre-colonial world of Central America.

18. What film haven’t you seen that you feel like you should?

People were historically better at entertaining each other in previous eras – more directly, and with more interaction. I miss that. My hope for the future is for a solution to plastic and petroleum-based products in our environment.

As long as the meal isn’t on death row, most anything could be cool. But I would love to taste my grandmother’s cooking again.