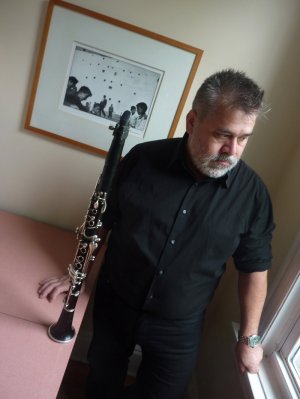 Multi-reed player Oscar Noriega played in the very first Sound It Out concert, helping to kick off the series in June 2012 as part of Tim Berne’s hit band Snakeoil. As a charter member of the house-rocking Endangered Blood – with Chris Speed, Trevor Dunne and Jim Black – Oscar also played in Sound It Out’s first-anniversary fundraising festival for Greenwich House Music School. Oscar makes an overdue return to the series on June 16, 2018, to do double-duty. He will play his usual mix of clarinets and alto saxophone with Gordon Grdina’s Inroads Quartet (alongside the guitarist/oudist leader, pianist Russ Lossing and drummer Satoshi Takeishi); and, to open the evening, he will be behind the drum kit for the Crooked Trio, his group with pianist Marta Sanchez and bassist Lim Yang. Known for its longstanding standards gig at Barbés in Brooklyn, the Crooked Trio will be celebrating at Greenwich House the release of the band’s debut album, Deluxe (Barbés Records), which features “originals in a standards vibe” by all three members. Born in 1968, Oscar grew up in Tucson, Arizona, and has played with such elders as Paul Motian, Dewey Redman, Lee Konitz, Gerry Hemingway and Anthony Braxton. A connoisseur of tequila and spicy food, Oscar is a convivial guy, as well as an excellent, engaging musician – with tastes that range from not only jazz of the classic and avant-garde varieties but also to Mexican banda and country-and-western. — BB

Bird with Strings by Charlie Parker.

Overrated jazz albums? Get in line…

The IRS Tapes – Who’ll Buy My Memories by Willie Nelson.

Showboat by Kenny Dorham – loved it. So lyrical…

Once Upon the Time in the West by Ennio Morricone.

Most favorite: Barbès, for the vibe. Least favorite: Cornelia Street Café, for its vibe and the pay cut.

“We have both kinds of music – country and western.” — The Blues Brothers

DownBeat (though it can be the Fox News of music).

Lee Konitz, for his sensitivity.

No time for contempt.

The Grand Canyon — life is short.

The Unbearable Lightness of Being by Milan Kundera.

I miss landline telephones, many things analog, having dinner without cell phones. And I look forward to having a vote that counts.

Start with a margarita… then dry-aged porterhouse steak cooked by me at my house, plus roasted potatoes with rosemary olive oil and a nice Brunello to drink. Shared with friends I love.