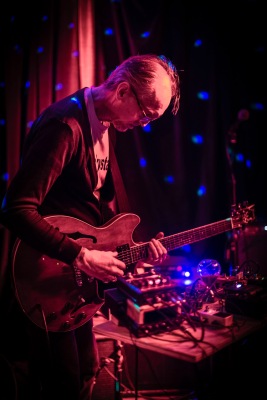 The bewitching solo music of guitarist Norman Westberg has been an obsession of mine over the past few years, as have the high-impact latter-day records by the band he has long been associated with: Swans. To read more about his music and background, see a story that I wrote titled “Topographic Guitar” (after Lawrence English’s evocative phrase about Norman’s playing) – I posted the piece on the site here. Norman will cap Sound It Out’s 2018-19 season on June 27, 2019, performing a solo show at Greenwich House Music School as part of an ambient-oriented double-bill with the fine duo of Simon Jermyn (guitar) & Joseph Branciforte (electronics). Norman’s otherworldly atmospherics might not seem to fall within the characteristic avant-jazz bent of Sound It Out, but his live solo music-making makes for spontaneous composition of rare sensual beauty and striking originality, two qualities prized for the series. His latest studio album, the finely crafted After Vacation, is as intoxicating as a drug. A native of Detroit, Norman has long been a denizen of downtown New York City; although a connoisseur of music from punk to raga, from the Stooges to Stars of the Lid, he is a true-blue rocker, as well as a family man and a lovely guy. It’s an honor for Norman Westberg to play Sound It Out. — BB

The “stayed in love with” is the loaded part… I’m still in love with Black Sabbath’s Paranoid.

I am not really a big Bob Dylan fan, so…

Raja Hindustani. Bollywood was great in the late ’90s.

West Side Story, by Leonard Bernstein. The opening scene in the movie is incredible. I like both the Broadway and movie scores.

I did a one-month tour with DBUK all around the east and Midwest. They are fantastic.

I really don’t have a favorite or least favorite venue. The good ones are comfortable, easy and smooth. The bad ones are annoying, difficult and sad.

It’s not a quote about music, as I’m not sure if I know a great one, but my favorite quote is from Ken Kesey: “It’s the truth, even if it didn’t happen.”

He wasn’t a visual artist, but I would say that a drink or two with actor Oliver Reed would have been a highlight…

I don’t really follow news about music anymore. There was a time when I cared, or tried to care. Then it would have been all of the usual magazines of the day…

Always listen and always be curious and open-minded.

My wife, Jeni. She is very focused on her art and is an amazing person.

Ha, I can’t believe this one. Looking for some Pete Burns vs. Boy George action? You never know who might be listening…

I re-read books all of the time. At the moment, I would like to re-visit At Dawn We Slept: The Untold Story of Pearl Harbor, by Gordon Prange.

No thanks, though I suppose it would depend on where, and the circumstances…

I don’t really miss anything of the past – I think the present is just fine. Maybe I’ll learn some new, cool stuff in the future. That would be great. 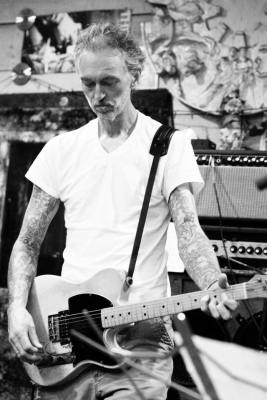