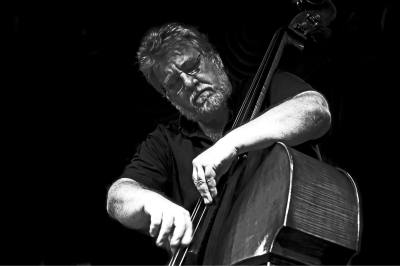 Bassist Michael Formanek ranks as one of the most compelling and prolific composer-bandleaders on the creative music scene, as well as being an affable, always interesting presence in any setting. Born in San Francisco in 1958, he has figured in myriad contexts since playing a precocious gig with the Tony Williams Lifetime when only 18 years old. The bassist has performed with old masters from Lee Konitz to Joe Maneri via Joe Henderson, Freddie Hubbard and Stan Getz, along with collaborating with a who’s who of today’s most progressive New York players. Mike has played Sound It Out since its inception, featuring in the second concert of the series back in June 2012, as a member of Devin Gray’s Dirigo Rataplan. Since then, Mike has graced the Greenwich House stage nearly 10 times as both leader and sideman. Particularly noteworthy Sound It Out appearances by Mike include a solo bass show in 2013 and a duo performance with saxophonist Tim Berne the following year. The bassist’s past three ECM albums as a leader – the quartet discs The Rub and Spare Change (2010) and Small Places (2012), and the mighty large-ensemble set The Distance (2016) – each earned five-star reviews in DownBeat, a rare feat. The New York Times aptly described Mike’s music as “graceful in its subversions, even sumptuous.” This summer, the cooperative trio Thumbscrew – featuring the bassist alongside guitarist Mary Halvorson and drummer Tomas Fujiwara – released a pair of excellent albums, Ours and Theirs, via Cuneiform. Mike’s latest album as a leader, the engrossing Time Like This (Intakt), presents his Elusion Quartet, with saxophonist Tony Malaby, pianist Kris Davis and drummer Ches Smith.

Earthy yet atmospheric, Mike’s brand of jazz is alive with dark-hued melody and bone-deep rhythms, rich in dynamic possibility and the sound of surprise. He returns to Sound It Out to lead his newest band – his Very Practical Trio, featuring Tim Berne and Mary Halvorson – on October 25, 2018. — BB

Science Fiction by Ornette Coleman. I can’t say absolutely that it was the first, but it was really early on and I still love it.

Time Out by Dave Brubeck.

The Declaration of Musical Independence by the Andrew Cyrille Quartet. Yes, I did…

That’s a pretty high bar… But I really loved the Archie Shepp performance at the Vision Festival at Roulette in Brooklyn in May 2018, with the band featuring Dave Burrell, William Parker and Hamid Drake.

My very favorite: the Village Vanguard, for the sound, vibe, history. Least Favorite: the Blue Note, for its discomfort, bad layout and the attitudes…

“The true way of progressing through music is to evolve freely, to go forward, not caring what others think and, in this way, together with one’s development in music, to harmonize the life of one’s soul, one’s surroundings and one’s affairs.” — Hazrat Inayat Khan, The Mysticism of Music, Sound and Word

Point of Departure, All About Jazz, Freejazzblog.org, DownBeat, JazzTimes, NPR.

Barack Obama – the desire to learn.

Donald J. Trump – the lack of the desire to learn.

I love history, but I’m always a little careful about romanticizing the past. There has been positive and negative parts about virtually every period of time, depending on who you were, what you looked like, and where you fit into society. I could say that I would like to live in the late 1930s, but if I were Jewish and living in Germany or Poland, then in that case not so much. Late 16th-century Northern Italy might have been interesting, but not if I were a shit-sweeper in Venice…

Lust for Life by Irving Stone, his biography of Vincent Van Gogh. This book had a big impact on me when I read it in high school, though I’m not sure how it would hold up now.

I Am Not Your Negro by Raoul Peck, not that I feel like I should but I want to see it and just haven’t yet.

Lamb Barbacoa from South Philly Barbacoa by Cristina Martinez, in Philadelphia. I recently played the October Revolution Festival there, and they had some catered food from her restaurant backstage at one of the venues – the barbacoa was incredible! Then someone told me that she and the restaurant were recently featured in Chef’s Table on Netflix, so I watched the episode. Definitely last meal for me!