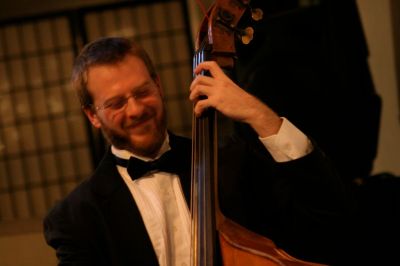 Matthew Thomas Elliott – Moppa – was born in 1978 in Scranton, Pennsylvania, and raised by music-loving college teachers. After starting on electric bass guitar, he fixed up his dad’s old acoustic double-bass as a teenager, eventually taking private lessons and going to Oberlin, majoring in both biology and jazz bass performance. He moved to New York City with the turn of the century and soon formed Mostly Other People Do the Killing, a band as playful as it is virtuosic, with the credo that “jazz is still alive and vibrant, but it can and should be fun, engaging and thoroughly contemporary.” MOPDtK – with trumpeter Peter Evans, saxophonist John Irabagon, drummer Kevin Shea and, by 2013, pianist Ron Stabinsky – has released a series of albums via Moppa’s Hot Cup label, incorporating that sense of fun and irony into whatever they do, whether it’s presenting free-bop originals or exploring the sound worlds of past styles. The band has applied itself to early, hot jazz tropes and even those of fusion; most polemically, MOPDtK released Blue, a note-by-note re-creation of Miles Davis’s ever-hallowed Kind of Blue. It was work like this that led The Atlantic to say the band had the air of “court jesters,” using light-hearted humor to make serious points about interpretation, improvisation and the nature of jazz.

Moppa has also released an album of solo bass (Still, Up in the Air), and his label has put out an album of Stabinsky’s solo piano, as well as discs by pianist Danny Fox and guitarist John Lundbom. Last year, MOPDtK released Paint, its first album in trio guise, with Moppa alongside Stabinsky and Shea. Featuring such rollicking, hook-laden Moppa originals as “Yellow House” and a cover of Duke Ellington’s “Blue Goose,” Paint was called “one of the best trio albums of the year” by All About Jazz. The DownBeat review said: “While the new piano-trio version of MOPDtK is missing the high-octane wackiness of the original lineup, the stronger spotlight on Moppa Elliot’s compositions pays dividends. His warping of traditional elements creates ideal vehicles for elastic pianist Ron Stabinsky.” Moppa and MOPDtK, in its trio incarnation, make their debut in the Sound It Out series as part of a double-bill on April 21, 2018, performing music from Paint and more. — BB

We Get Requests by Oscar Peterson.

Blues and the Abstract Truth by Oliver Nelson.

Pet Sounds by The Beach Boys.

“Writing about music is like dancing about architecture.” — Martin Mull (probably)

Reddit, The New Yorker, Ethan Iverson’s Do the Math.

I miss record stores. And I look forward to self-driving cars.