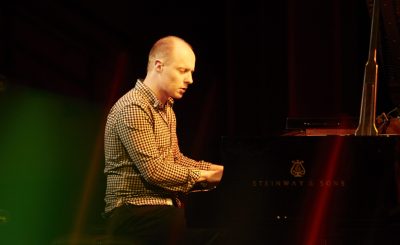 Pianist-composer Marc Hannaford, born in 1982, grew up in Wollongong on the coast near Sydney, Australia, before living much of his adult years in Melbourne. His master’s thesis at Victorian College of the Arts and Music revolved around using Elliott Carter’s rhythmic language as a basis for improvisation – a heady approach that led to a visceral recording, the trio album Sarcophile (the title, interestingly, referring to a flesh-eating animal, specifically the Tasmanian Devil). In 2013, Marc moved to New York City, where he is working toward his PhD at Columbia University. Not long after arriving in New York, Marc released an excellent quartet album – with trumpeter Scott Tinkler, saxophonist Ellery Eskelin and drummer Tom Rainey – titled Can You See with Two Sets of Eyes? As ever, Marc’s music combines inner complexity with surface allure – it’s as beautiful as it is deep. None other than genius pianist Jason Moran has marveled over Marc and his passion for both modernist composition and jazz improvisation, pointing out that he “has taken full control of the music histories that interest him: from Messiaen to Earl Hines. When Marc fuses those histories with his own compositions, the results are a new sound that only comes from within him, and thankfully they exist for us to hear.” On November 11, 2017, Marc makes his Sound It Out debut, leading his fascinating trio with Simon Jermyn (bass guitar) and Satoshi Takeishi (drums). — BB

A Rose is a Rose by John Rodgers.

Korean Music: Folk and Court by Kim So-Hee, Kim Jung-Hee, Kim Kyung-Hee and Pak Cho-Sun. I am only just beginning to check this music out – it is incredibly powerful and beautiful.

The Studio in the Sydney Opera House is a fantastic venue to play. In New York City, I like Bohemian National Hall, the (old) Stone, the Kitchen and IBeam, among others. Any venue that doesn’t make the sound of the music a priority makes it a bad one.

The following caught my attention recently: “Generally in the AACM, after it got going, anyone’s ideas were considered great. No one ever told you your ideas were not good. People like Muhal [Richard Abrams] – their idea was basically you already knew the truth about your work. You just needed to face it and deal with it. And it wasn’t like you needed to stop anything. You just needed to be aware.” — George Lewis via https://van-us.atavist.com/boundaries

The piano, pencil/paper and my laptop.

Electric kettle – I enjoy my morning coffee very much.

Most of my reading about music comes from books and journals – but I also read The Wire, Alex Ross in The New Yorker, Ethan Iverson’s blog Do The Math, NewMusicBox and BOMB Magazine.

Health – I listen, think and create better when I’m physically and mentally healthy.

My girlfriend, Roberta Sutton, for her honesty and kindness.

Donald Trump, for his idiocy and enabling of hatred.

The beach I grew up next to in Austinmer, Australia – expansive, iconic, refreshing.

Whenever the population of the world is less divided by a hatred for difference.

I miss the way things were before we had access to the internet all the time. I look forward to a more stable ecological and biological global environment.