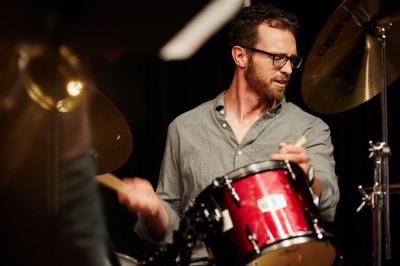 Drummer-composer Jeff Davis was born in 1976, “a bicentennial baby,” in Greeley, Colorado. (He notes that the bicentennial quarters had a drummer on the back, which “I’ve always thought was cool,” he says.) Jeff’s parents were both music teachers, with his dad serving as his high-school band director. Since moving to New York City in 1999, he has remained close with several kindred-spirit musicians – pianist Russ Lossing, bassist Eivind Opsvik, saxophonist Tony Malaby, guitarist Jonathan Goldberger, cornetist Kirk Knuffke, pianist Jesse Stacken – collaborating with them consistently over nearly two decades. Jeff’s leader album Leaf House, from 2012, is an exceptional piano-trio recording, showcasing his ever-surprising yet tune-rich compositions and a rare interplay between the drummer, Lossing and Opsvik. Jeff has also released the live-wire quartet set Dragon Father (2014), the hook-laced electro-acoustic sextet disc We Sleep Outside (2010) and, with Malaby and Opsvik, the live trio album Tone Collector (2005). Jeff first performed for Sound It Out as one of six featured drummers in the “Motian in Motion” event in last June’s festival for the fifth anniversary of the series. He makes his series debut as a leader on September 28, 2017, fronting a quartet with Malaby, Lossing and Opsvik. About his longstanding musical relationships, Jeff says the key is trust: “Trust in the music. Trust in each other, musically and otherwise. I know that whatever I present to these guys, these incredible improvisers, that the music will be realized way beyond its initial intent. The compositions are merely the springboard – the band brings the magic.” — BB

I tend to not think in terms of overrated/underrated. Under known, maybe. There are a lot of under-known records out there, and I bet there is some great music on them yet to be discovered.

Wish You Were Here by Pink Floyd.

The Good, the Bad & the Ugly, by Ennio Morricone. Perhaps an obvious choice, but it’s one of my all-time favorites.

Every time that I go to hear music, I feel re-energized – cheesy, but true. As far as life-changing goes, whenever I would go hear Paul Motian, especially at the Village Vanguard, I was always completely blown away.

Favorite: Other than Greenwich House Music School, I love the Village Vanguard – history, vibe, magic. Least favorite: Any place that does not have the artist’s needs at the forefront – like coffee…

I have two. Aldous Huxley: “After silence, that which comes nearest to expressing the inexpressible is music.” And Igor Stravinsky: “Lesser artists borrow, great artists steal.”

Salvador Dalí – pretty sure it would be a good hang.

Be respectful and listen. Really listen.

Right now, Trump. His vision of this country and his world view are harmful, at best.

I have thought about this one a lot. Short answer: the late ’60s, for the vibe, the music, etc. Long answer: We are here now, the music is so killing now – let’s live in the now.

I miss the feeling of innocence, perceived or otherwise. And I look forward to a new age of discovery. I am a big Star Trek fan, and I feel that the Star Trek ideal would be a pretty cool future.