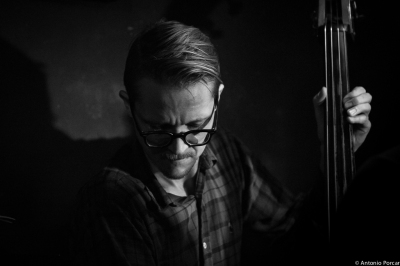 Bassist-composer and producer-engineer Eivind Opsvik – born in 1974 in Oslo, Norway, but a New Yorker for two decades now – has crafted for himself that most desirous yet elusive thing for a musical artist: a unique, instantly recognizable sonic identity. His soundprint blends the song-minded composition and creative studio craft of art rock with the virtuosic edge and spontaneity of progressive jazz. As The New York Times has said: “Eivind Opsvik has an unusual gift for writing small, poignant pieces of music. His melodic shards are strong, as are the chord sequences moving underneath; to a degree, the musicians take a subordinate role to the written concepts. This is no small thing: He has the distinction, in a time when jazz compositions are increasingly opaque, of writing catchy tunes.” As a bandleader and expert record-maker, Eivind’s primary vehicle has been his group Overseas, issuing its albums via his own Loyal Label imprint. The most recent release, Overseas V, finds Eivind tapping post-punk influences (Joy Division, New Order, Talking Heads) and the inspiring example of Brian Eno’s early avant-rock LPs – off-kilter tunes played by great instrumentalists. The latest incarnation of Overseas features some of the most compelling improvisers on the New York scene: saxophonist Tony Malaby, guitarist Brandon Seabrook, keyboardist Jacob Sacks and drummer Kenny Wollesen. Eivind has performed with Overseas multiple times in the Sound It Out series, including a release show for Overseas V in April 2017. In the series, he has also co-led the band Two Miles a Day with Jacob Sacks, along with performing as a sideman in groups led by the likes of Tony Malaby, Brandon Seabrook, Harris Eisenstadt, Vinnie Sperrazza and André Matos. Eivind will perform next for Sound It Out in Jeff Davis’s Holyoke quartet on September 28, 2017. — BB

I think it must have been a Miles Davis album – We Want Miles on LP, but then Star People was the first CD I ever got. I still love both those records.

I’ve been thinking, and it seems to me that classic jazz albums are classics for a good reason…

The soundtrack to the movie Sing, which my 5-year-old daughter loves. I didn’t particularly enjoy it, as it has been on heavy repeat in my household… But I’ve also been checking out more Hampton Hawes recently, and his High in the Sky is great, so it’s probably one of the last full albums I listened to all the way through. Drummer Donald Bailey sounds so good on that record.

A recent concert I enjoyed was PJ Harvey at Brooklyn Steel in Williamsburg, Brooklyn. It was a very good show, even if to say that it made me fall in love with music all over again is perhaps an exaggeration.

“Music is a moral law. It gives soul to the universe, wings to the mind, flight to the imagination, and charm and gaiety to life and to everything.” — Plato

Maybe Francis Bacon, but Salvador Dalí would be fun, too, or El Greco…

It may not be very original, but… Trump, not only for his narcissism but for bringing out the worst in people.

Perhaps Stranda, a village on the west coast of Norway (think fiords). My grandfather built a cabin there – I love that place. I also love Costa Rica, where my wife is from.

I’m really interested in history so I would love the ability to time travel, just to observe for a day or so. For music, I’d for sure swing by New York City in the ’30s, ’40s, ’50s, ’60s. And I’d love to go back and see J.S. Bach perform in his church, The Beatles recording Sgt. Pepper’s Lonely Hearts Club Band, the first performance of Stravinsky’s Rite of Spring in Paris that led to riots… But all in all, I think the current time period is the most just and peaceful, although we have a long way to go and there are many frightening prospects.

The Grapes of Wrath by John Steinbeck.

A bunch of art movies I should probably see – by Kurosawa, for example, but also French and Italian classics…

I miss the magic of discovering and seeking out music before everything was so readily available online… And I look forward to time travel (see above).

I have to say the food at Cosme in Manhattan is pretty outstanding – contemporary Mexican. But I would definitely go for my wife’s recipe for plum chicken as my last meal…