The first installment of a recurring feature on sounditoutnyc.com, an artist answering a survey inspired by the famous Proust Questionnaire… 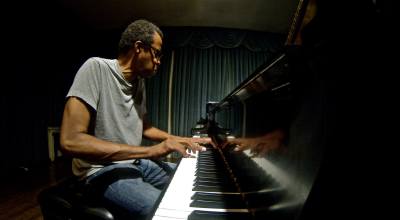 Pianist Matthew Shipp, a native of Delaware born in 1960, has been a fixture in New York City’s avant-jazz scene since the 1980s, and he remains as prolific as ever, releasing multiple albums each year as a leader for various labels (not to mention his appearances as a sideman). In the early 2000s, Shipp began curating Thirsty Ear’s Blue Series, shepherding a line of albums that melded progressive jazz with beat and remix culture in an artful, evergreen way. Prior to becoming a standout soloist and bandleader, he was a member of saxophonist David S. Ware’s edgy quartet for more than a decade. Subsequently, Shipp has collaborated extensively with saxophonist Ivo Perelman. The pianist’s most recent studio release as a leader is Piano Song (Thirsty Ear), with bassist Michael Bisio and drummer Newman Taylor Baker. But there have also been three live albums featuring Shipp available this year: the solo Invisible Touch at Taktlos Zurich (Hatology); This Is Beautiful Because We Are Beautiful People (ESP-Disk), with reed player Mat Walerian and bassist William Parker; and Magnetism(s) (Rogue Art), with Parker and saxophonist Rob Brown. Shipp performed solo in the Sound It Out series in September 2014. — BB

Any Return to Forever album.

Study in Brown by Clifford Brown – I love it.

Not sure – maybe Jesus Christ Superstar, if that counts.

I have not been to a live gig lately except for hearing others at the same festivals I’ve been playing – and I haven’t really experienced the sort of enthusiasm that I had when I was young, as far as being in the audience at someone else’s concert.

My favorite venue is the Earth as a whole – I love to play for people who listen, wherever it is. My least favorite would be places with horrible pianos, wherever that may be. I love to play, but a bad piano hurts.

“If you don’t live it, it won’t come out of your horn.” — Charlie Parker

My brain. A good piano. If it’s not an acoustic gig, then a good monitor.

All About Jazz. It used to be the JazzTimes website.

The boxer Floyd Mayweather Jr., for the dedication to his craft.

Donald Trump – every aspect of his existence.

The void which is outside of space/time.

I miss life before social media, which has cheapened everything. And I look forward to teleportation.