Saxophonist-composer Tim Berne – who inaugurated the Sound It Out series with his band Snakeoil back in June 2012 – recently released an excellent live Snakeoil album via the Swiss label Intakt. Titled The Deceptive 4, the double-disc set ranges from 2009 to 2017. I wrote the album’s liner notes, posted here… 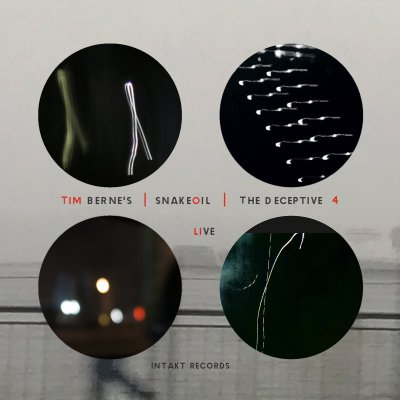 Tim Berne’s band Snakeoil has been the veteran saxophonist’s prime vehicle for the past decade-plus, even as he has also moonlighted in groups led by others (Michael Formanek, most notably), collaborated with colleagues old and new (such as Nels Cline and Nasheet Waits) and, recently, made a solo alto record. For all his additional, indefatigable activity, it is through Snakeoil — which also features clarinetist Oscar Noriega, pianist Matt Mitchell and percussionist Ches Smith — that Berne has advanced most as a composer and bandleader in the 21st century, having produced five lauded studio albums with the group.

This double-disc live document, The Deceptive 4, traces the evolution of both Berne’s writing for Snakeoil and the way the band interprets his compositions onstage — from the group’s nascent beginnings to not long before the recording of its most recent studio release, and first for Intakt, The Fantastic Mrs. 10 (a leap ahead that included guitarist Marc Ducret as live-wire guest star). The quartet music captured on The Deceptive 4 flows from sinuous lyricism to expressionistic fierceness and back again like sonic quicksilver, the players utterly attuned to each other and the questing dynamism of the material.

Disc One presents a Snakeoil concert recorded in 2017 within the studio-like acoustics of Firehouse 12 in New Haven, Connecticut. Disc Two combines music from the foursome’s second and third shows ever, before Berne had even settled on a firm name for the band. The first three tracks on the second disc were recorded in 2010 at the intimate IBeam space in Brooklyn, New York, with the fourth track — an homage to Berne’s key mentor, saxophonist-composer Julius Hemphill — taped in 2009 at the theater Roulette, also in Brooklyn. “It might seem unusual for a group that has stayed together as long as Snakeoil to still go for blood every time we hit the stage, but there has never been any holding back with this band,” Berne says. “It’s always exciting, because these guys keep finding new ways of surprising me.”

The keening “Perception” that opens Disc One initially appeared in different guise on Angel Dusk, Berne’s first duo release with Matt Mitchell. The almost ritualistic “Moornoats” is an early presentation of material that became “Rolo” on The Fantastic Mrs. 10, while the rough-and-tumble “Seven” is a quartet rendering of what became “The Amazing Mr. 7” on the same album. The dizzyingly headlong “Deception” is new to a Berne record. On Disc Two, the arrangements from the IBeam show — of “OC/DC,” “Scanners” and “Spare/Città” (a 20-minute stunner of noir melodicism that’s actually a mashup of the tunes “Spare Parts” and “Simple City”) — would morph significantly by the time the pieces made it onto the band’s first two ECM albums.

Regarding the standout “Hemphill,” recorded at Roulette, this is another piece that hasn’t appeared on a previous Snakeoil album. It consists of music by the titular composer with extensions by Berne — a creative tribute to a musical elder. “I’m thrilled to finally have this piece on a record,” Berne says. “Before I started the band, Oscar and I played through Julius sketches that I had from when I studied with him in the late ’70s. They were rubato phrases, long melodic lines with two-part harmony. I added a mid-section and an ending, plus harmonized piano lines. I strove to keep the flavor of Julius’s stuff, which I’ve always loved. It was Julius who provided the blueprint for me as a working musician. I learned countless things by watching him go about his business, but that Julius method of rubato improvising, building intensity through melodic lines rather than just relying on texture — I’ve essentially been paraphrasing that ever since.”

The Deceptive 4 underscores how Snakeoil can achieve that sort of melodic density, as well as a driving rhythmic force. “The band has the power to get heavy, but not having a bass player allows some air in the sound,” Berne notes. “And by the Firehouse 12 gig, more spaces are opening up. Not everyone is playing at once — there are more duos and trios within the music.” Another vital element is Ches Smith’s expanding battery of percussion. “Ches started playing vibraphone, timpani, gongs and hand drums, in addition to his trap kit,” Berne says. “He adds a lot to our sound. No one plays vibes like Ches — and he has a special chemistry with Matt when they improvise together.”

What Berne values most in a musician is “fearlessness,” he says, “and an obsessive devotion to dig in deep.” Mitchell has those qualities in spades, having recorded his own album, førage, that saw him re-engineering Berne’s ensemble compositions as odysseys for solo piano. “No one knows my music better than Matt — he’s the glue of the band,” Berne says. As for his foil on reeds, Berne says: “Oscar and I have distinct approaches, yet we blend well together. Everyone in the group has his own personality. They take direction well, but they don’t need it.”

Berne adds that his ongoing motivation to compose for Snakeoil comes from knowing how “these guys feed off a challenge.” And regarding his own playing, Berne’s brand of lyrical and rhythmic intensity has only heightened with the years. “Listening to these gigs recorded over a long span,” he says, “I was relieved to hear that I haven’t mellowed out.” 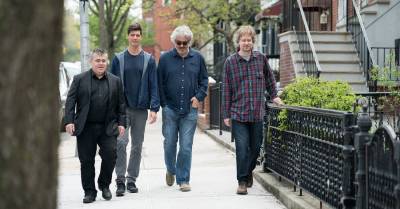